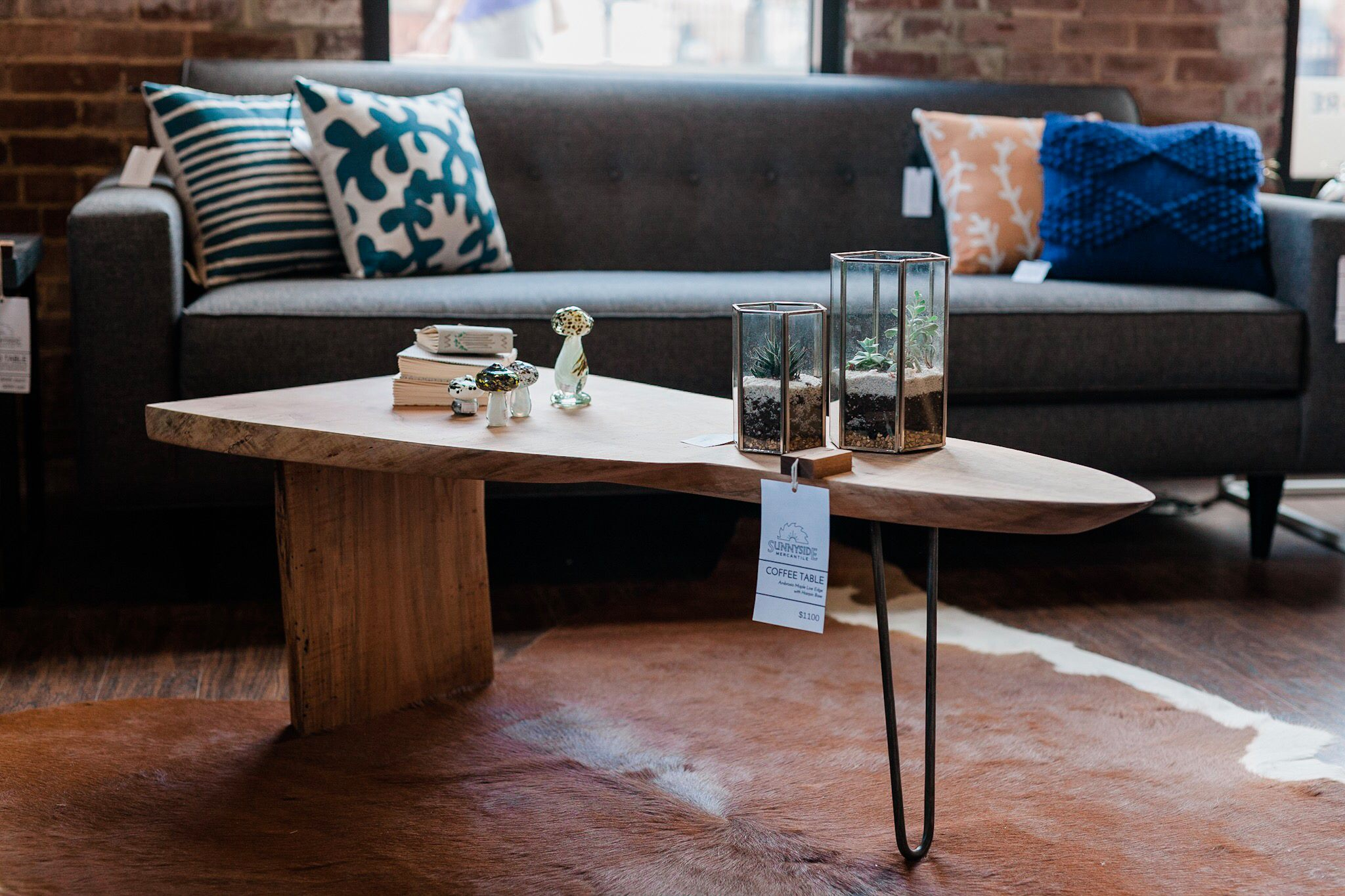 Tracing back to the founding of Salem, Winston-Salem’s history of craftsmanship continues to live on, inspiring artisans and entrepreneurs throughout the city still today. We caught up with the owners of Sunnyside Millwork to discuss how the city has influenced their handcrafted furniture and where you can see it during your next visit.

Husband-and-wife duo David and Amber Dalholt started Sunnyside Millwork in Winston-Salem in 2016. Initially, David was making custom tables and cutting boards in the basement of their home as a side hustle to help cover the cost of diapers for their newborn. As demand for David’s fine craftsmanship grew, so did the business.

David left his full-time job as a construction foreman (working on some historic restoration projects) in 2017 to pursue millwork exclusively.

Initially from Fort Lauderdale, FL, the Daholts were looking to relocate and had friends in Winston-Salem who were already raving about the area. They visited and fell in love with Winston-Salem instantly. After all, craftsmanship is part of the city’s rich history—from the makers of Old Salem to the birthplace of NC craft beer to America’s first arts council. Amber says she and David are “just glad to carry the torch” since there have been so many artists and makers before them in Winston-Salem that helped pave the way for their thriving business.

When it comes to inspiration, Winston-Salem offers it at every turn. In particular, Amber explains how the architecture in and around Winston-Salem has influenced Sunnyside’s designs. Many of their pieces draw from the look of the city’s historic craftsman-style bungalows, pulling this aesthetic into the kitchen through tables or cabinets. Sunnyside Millwork designs often pay homage to the past with a modern take, a theme echoed throughout Winston-Salem as a whole.

At Sunnyside Millwork, David and his team of craftsmen work with solid wood, using live-edge slabs to create one-of-a-kind creations that demand to be noticed. The finished pieces are surprisingly soft and smooth to the touch. Amber says that if you want to touch the table, it makes it more enjoyable to actually sit at that table. And since the craftsmen at Sunnyside Millwork want their pieces to be loved for generations, the way it feels truly matters.

Since expanding its operations, Sunnyside Millwork has taken on a wider range of projects, including cabinetry, upholstery, commercial furniture, and custom designs—like high-end entertainment centers built to suit a particular space. When you wander around Winston-Salem, you can see Sunnyside Millwork creations in the lobby and wine loft at Hotel Indigo, at Milton Rhodes Center for the Arts, at Dogwood Hops and Crops, and Incendiary Brewing.