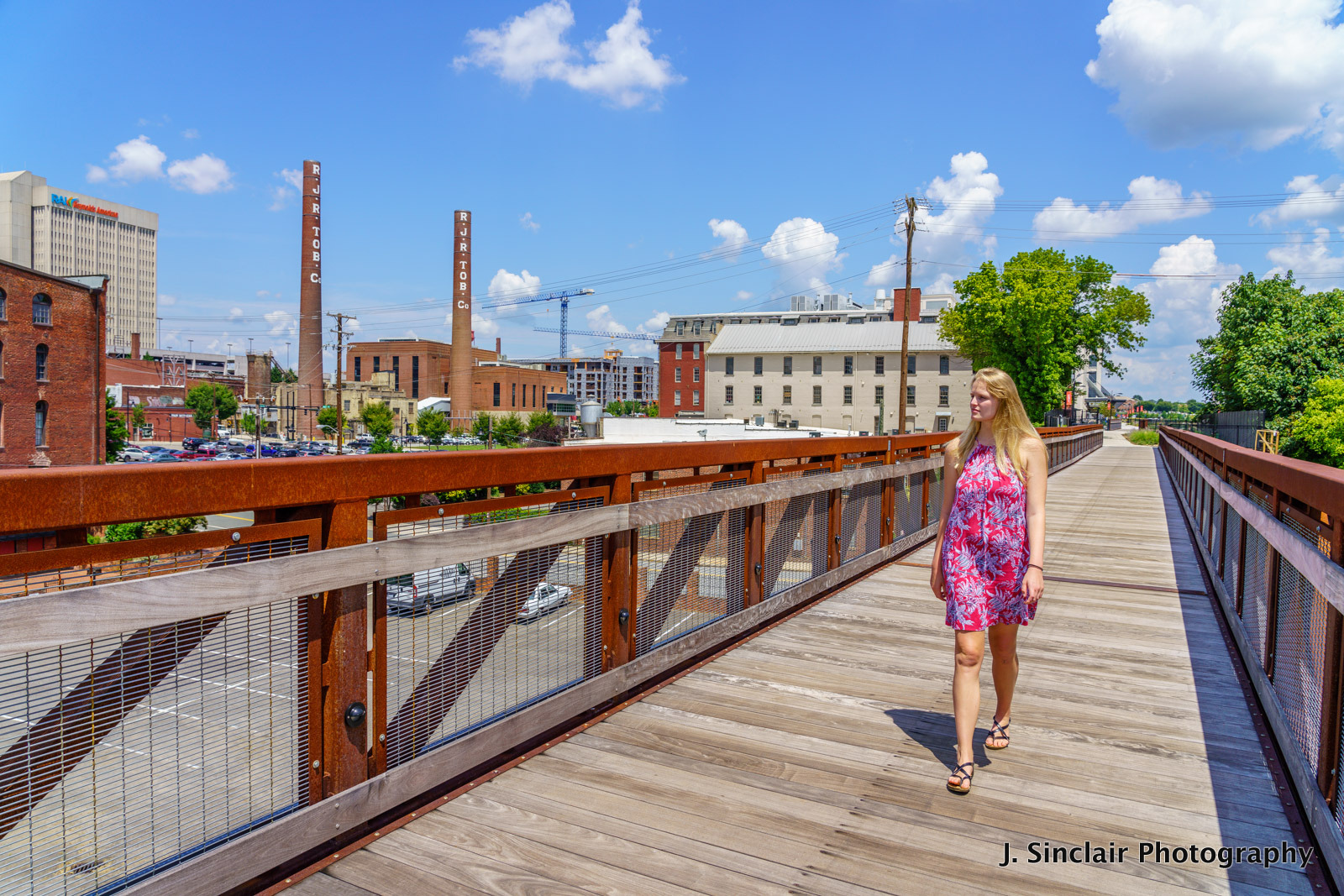 Treks in the City: Downtown Paths Worth Winding Through

In hip yet historic cities, like Winston-Salem, downtown strolls can serve as a fun alternative to mountain hikes. There are two greenways that connect Winston-Salem’s downtown with surrounding nature walks and parks. Read on to learn more about the greenways as well as a few treasured finds and picture-perfect sights along the way.

The 1.2-mile strollway runs through the southernmost portion of downtown, neighboring Old Salem Museums & Gardens. Starting at the intersection of Old Salem Road and Salem Avenue, a journey along the strollway first brings you to the Heritage Bridge.

Connecting the 1766 Moravian settlement of Salem (now Old Salem Museums & Gardens) to the Old Salem Visitor Center, the pedestrian Heritage Bridge is built of repurposed Southern yellow pine, commonly used during the days of Colonial America, and its arch detailing is inspired by the architectural heritage of the original Moravian settlement. Learn all about early 18th-century Moravian customs by purchasing a ticket to tour the interpreted historic buildings and gardens.

Continue along the shaded strollway past historic homes built in the 18th century, until you reach downtown’s historic train depot. Originally the Winston-Salem Southbound Railway Freight Warehouse, this train depot is the earliest surviving building associated with the city’s once-thriving railroad commerce. Stop for lunch at locally-owned Willow’s Bistro, or if traveling with tots, walk to Kaleideum Downtown, an immersive children’s museum complete with climbing beanstalk, storybook land, and mock Krispy Kreme factory. (Did you know the famous “Hot Now” doughnut company started in Winston-Salem?)

Keep north on the strollway until you reach First Street with Corpening Plaza. An urban oasis, Corpening Plaza is a great spot to picnic downtown. On select Fridays during the summer, the plaza is host to Downtown Jazz from 6–9 p.m. See this summer’s lineup here.

You’re now just a few blocks from Fourth Street thoroughfare, known to many locals as “Restaurant Row.” To the east, you’ll notice the newly opened Hotel Indigo at Fourth and Liberty Streets, housed in the historic 1928 Pepper Building. To the west, sidewalks lined with shops, a cinema, as well as local restaurants and bars.

Skip over to Trade Street and admire blocks of painted murals on cafes and galleries in the Downtown Arts District. Follow the red painted lines on the sidewalk to ARTivity on the Green, an art park where bright red beams seemingly scrape the clouds and vivid artwork is painted on the surrounding walls.

Head down Martin Luther King Drive to the entrance of Long Branch Trail on your right just before Research Parkway. The Trail winds around Bailey Park, which features vibrant mandala murals by local artist Laura Lashley, a covered stage, a food truck court, and public restrooms.

While hanging out here, grab a bite to eat at Alma Mexicana or Cugino Forno for Neapolitan pizzas. Next door, find Incendiary Brewing for local craft drafts and rotating live bands. Want to sync your stroll with Bailey Park events (such as live music, yoga, and film screenings)? Check out their event calendar here.

That's not all. iQ is one of the fastest-growing urban-based districts for innovation in the country. Home to more than 170 companies, five leading academic institutions (including Wake Forest Baptist Medical School), more than 3,700 workers, 1,800 degree-seeking students, and more than 8,000 workforce trainee participants, the Innovation Quarter is a place for research, business, and education.

Long Branch Trail then winds down the less crowded roads of Research Parkway, where you’ll find joggers and cyclists enjoying the scenery of downtown. The beautifully-lit overpass bridges make a stroll at dusk especially pleasant.

If you’re looking to extend your stroll, both the Strollway and Long Branch connect back to the Salem Greenway, a 20-mile trail that goes out to Winston-Salem State University before connecting at Quarry Park and Salem Lake.

In Winston-Salem, hiking doesn’t have to require special gear or a GoPro! Just get out there and take in the beauty of the city. And if walking isn’t your thing, check out Triad Eco Adventures for guided Segway, e-bike, and Stand-Up Paddleboard (SUP) excursions.

Creative Corridors and the NC Department of Transportation (NCDOT) spearheaded the building of two pedestrian bridges over Salem Parkway. These additions help to connect some of Winston-Salem’s historic residential neighborhoods with the liveliness of downtown.

Strollway Pedestrian Bridge: Creative Corridors engaged North Carolina native and internationally acclaimed landscape architect, Walter Hood, for the project. The bridge itself includes 12-foot-wide walkways to allow for both pedestrian and bicycle traffic. Planting beds are integrated into the bridge on either side of the walkway with a variety of native plants and ornamental trees.

Green Street Pedestrian Bridge: Connecting the West Salem neighborhood with Truist Stadium and the new development slated for the surrounding area, the Green Street Pedestrian Bridge serves as an artful and iconic western gateway to downtown. Its arching structure, designed by architect Donald MacDonald, is inspired by the arch of oak trees that are ubiquitous throughout the region.